Adele Mundy was a Cinnabar librarian and intelligence agent, and a close aquaintance of Daniel Leary.

Following the proscription of her family due to their involvement in the Three Circles Conspiracy, she was one of the last surviving Mundys of Chatsworth.

Adele was the daughter of Lucius Mundy and Esme Rolfe Mundy and the elder sister of Agatha Mundy.8:18 She was born on Cinnabar when her family was still among the most powerful houses of the Republic. She moved to the planet Bryce to study the collections of the Bryce Academy when she was sixteen years old. Three days after she arrived on Bryce, Corder Leary, the Speaker of the Cinnabar Senate, announced that he had uncovered the Three Circles Conspiracy, an Alliance plot to overthrow the Cinnabaran government with help from native agents. The Senate issued proscriptions against the conspirators, resulting in the death almost the entire Mundy family. The heads of Adele's parents and sister were put on display on Speaker's Rock.1:1

Adele spent the next fifteen years studying under Mistress Boileau and becoming an expert in archiving and filing techniques, as well as in computer hacking. When Elector Walter III of Kostroma asked Boileau to recommend somebody to head his newly founded Electoral Library, she sent Mundy to him.1:1

In 5147 CE, after playing a crucial role in the Battle of Kostroma, Mundy was recruited into Cinnabar Foreign Intelligence by Bernis Sand.1:4

Adele is the second main protagonist of the RCN series, after Daniel Leary.
Her first name is pronounced uh-DELL, according to the author.[1]

from the cover of With the Lightnings

from the cover of Lt. Leary, Commanding

from the cover of The Way to Glory 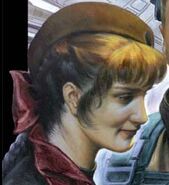 from the cover of Some Golden Harbor

from the cover of When the Tide Rises

from the cover of In the Stormy Red Sky 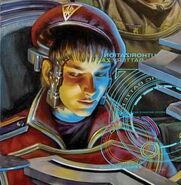 from the cover of What Distant Deeps 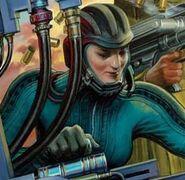 from the cover of The Road of Danger