RCS Princess Cecile was a Kostroman-built corvette of the Republic of Cinnabar Navy, and Lieutenant Daniel Leary's first command.

She was most likely named after Princess Cecile Alpen-Morshach of Topaz, who was in charge of the secondary colonization expedition to Kostroma.1:2

She was two hundred and thirty feet long and fifty-five feet wide, armed with two twin four-inch plasma cannon turrets, offset toward the starboard bow and sternwards to port.2:1

She was shaped like a long cigar, with two outriggers extended to give stability on water; after lift-off they would be drawn up against the hull to avoid interfering with the antennas and sails. Empty, it massed 1200 tons.3:8

Fully loaded, she massed 1300, and could accelerate at a little better than 2g at full thrust.

The Sissie had paired 4-inch plasma cannon in turrets on the dorsal bow and ventral stern, giving her four guns in total.6:3 She had five decks parallel to the axis; the bridge was on A—the topmost—Level in the bow, and the Battle Direction Center with its parallel controls and personnel was at the stern end.9:3

The Princess Cecile had three types of propulsion, much as most other starships: 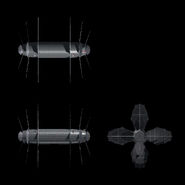 The Sissie floating on a lagoon 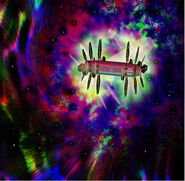 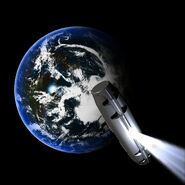 Note: David Drake liked this, but commented that the outriggers should be the full length of the vessel.[1] 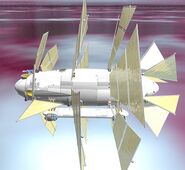 RCN Princess Cecile under full sail in the Matrix

Jeff has been working on building a model of the Princess Cecile, and posting his progress on his blog.

Retrieved from "https://rcn.fandom.com/wiki/RCS_Princess_Cecile?oldid=6399"
Community content is available under CC-BY-SA unless otherwise noted.